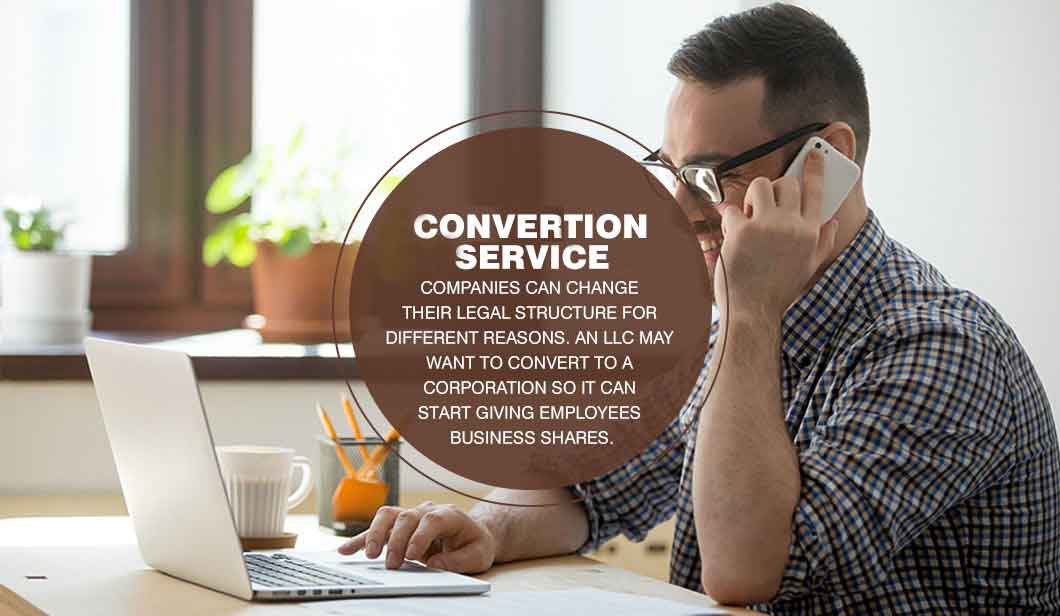 Conversion of business entity is the process of changing one type of business structure to another type. Depending upon certain objectives, requirements, advantages, constraints, or availability of specific benefits, a certain type of company may get itself converted into the required specific type of company. The process of conversion results in change of the legal status of the entity. The procedure for conversion of a business entity involves-

Pursuant to provisions of Companies Act, 2013 (“Act”), a private company by its articles restricts the right to transfer its shares and limits the number of its members to two hundred. While a public company has no such restrictions. A Company of any class already registered under the Act can convert itself as a company of other type by alteration of Memorandum and Articles of Association. The conversion of a Company does not affect any debt, liabilities and obligations. With respect to Section 14 of the Act, a company, by approval of its members through a special resolution, may alter its articles of association and render conversion of a private company into a public company.

Introduced in India by the revised Companies Act of 2013, a One Person Company (OPC) can legally convert into a private limited company, voluntarily or mandatorily. For voluntary conversion, the OPC must have completed two financial years from its date of incorporation. Under mandatory conversion, the total paid-up capital of the OPC should be more than Rs. 50 Lakh, or its average annual turnover during past three financial years should be more than Rs. 2 Crore. Again, the conversion of OPC to Private company in any case, must be in accordance with the provisions mentioned in the Sections 18 and 122 of the Companies Act of 2013; and the provisions given in the Companies (Incorporation) Rules of 2014, including the Rule 7(4).

CONVERSION OF PRIVATE LIMITED COMPANY INTO ONE PERSON COMPANY

A private limited company may convert itself into a one-person company (OPC), provided that it should not be a Section-8 company. For, Conversion of Private Ltd Company to OPC, it is required that the total paid-up capital of the private limited company, and also its annual turnover should be less than Rs. 50 Lakh and Rs. 2 Crore, respectively. The conversion process must be in accordance with the provisions in the Sections 18 and 122 of the Companies Act of 2013, and the rules given in the Companies (Incorporation) Rules of 2014, particularly the sub-rules in the Rule 7.

CONVERT A BUSINESS TO LLP

Conversion of Business to LLP can be done with the support of the Ministry of Corporate Affairs, Govt of India. Registered and regulated as per the provisions and rules given in the Indian LLP Act of 2008 and the LLP Rules of 2009, the limited liability partnership companies enjoy certain exclusive benefits and advantages over many other types of companies (incorporated as per the Companies Act of 2013). This is why many forms of business choose the option of its conversion to LLP.

CONVERT A PROPRIETORSHIP FIRM INTO A PRIVATE LIMITED COMPANY

A sole proprietorship firm may be converted into a private limited company, to avail variety of benefits granted by the Companies Act, 2013. In India, a private limited company enjoys the following notable advantages and benefits over the proprietorship type -lawful recognition nationwide, perpetual existence, benefits of limited liability, facilities and subsidies offered by the government, enhancement of the paid-up share capital as well as membership, and convenience in making compliances related to GST and the Companies Act of 2013.

Recently introduced in India by the revised Companies Act of 2013, the One Person Company (OPC) avails the following benefits and advantages over the sole proprietorship form of business - universal legal recognition and protection nationwide, benefits of limited liability, perpetual existence, availability of governmental subsidies and relaxations, facility of growing the paid-up capital and membership, and easier compliances to GST and all other laws concerned. Again, for formation and incorporation of an OPC, only one director and one shareholder are required, both may also be the same person.

Determining which states do and do not allow conversion of companies and the necessary steps and paperwork that goes into filing is time-consuming and often confusing. That’s the reason our experienced team at Tax Seva Kendra is here to assist and offer our expertise, so you can focus on running your business while we work on fulfilling your requirements.

We make sure your conversion is done quickly and accurately which provides your business accelerated growth and future development.

Which Companies cannot be converted into LLP?

The following companies are not eligible to convert into LLPs

What is the treatment for stamp duty issues, both in terms of original incorporation and conversion from other business structures? Would there be any stamp duty exemption in case of conversion?

Since Stamp Duty is a subject reserved for the States, the LLP Act does not contain any provision for treatment of stamp duty issues. The stamp duty payable will depend upon the relevant Stamp Act prescribed by the State Government/Union Territory.

What are the requirements and consequence provided in the Act in respect of licences, permits, approvals etc obtained by a firm, private company or an unlisted public company, prior to its conversion into LLP?

It has been provided in the Act that on conversion of a firm/private company/unlisted public company into LLP, any approval, permit or licence issued to the firm/private company/unlisted company under any other Act shall, subject to the provisions of such other Act under which such approval, permit or licence was issued, be transferred in the name of converted entity i.e., LLP.

Can an LLP be converted to Sole Proprietorship?