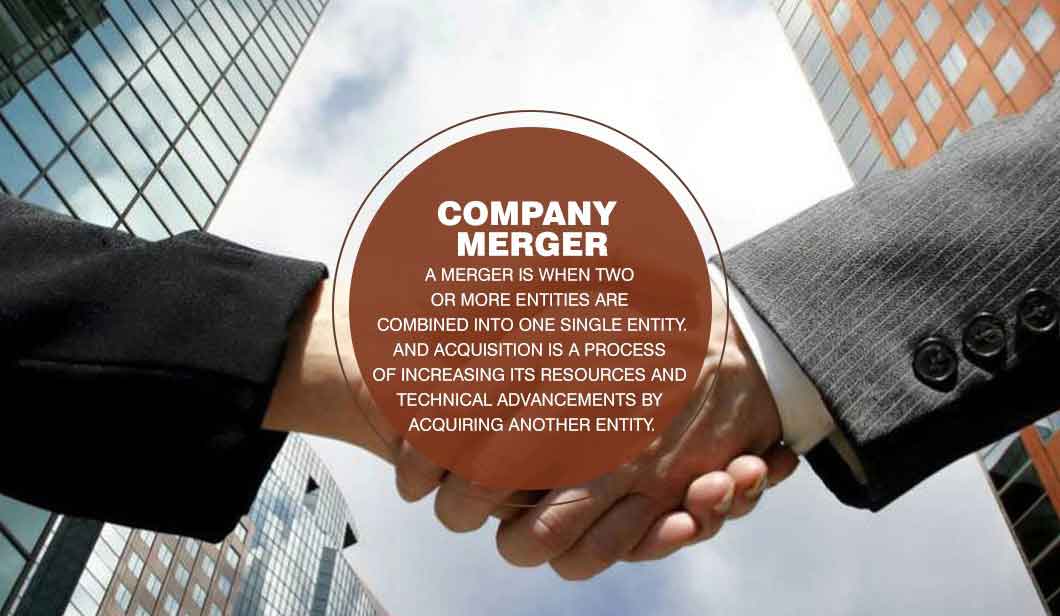 Mergers and Acquisitions are described as consolidation of companies or assets through various types of financial transactions such as mergers, purchase of assets, consolidation, acquisitions, tender offers and management acquisitions. A merger implies two or more entities are combined into one single entity. On the other hand, when one company takes over another and establishes itself as the new owner, the purchase is called an acquisition.

Mergers and Acquisitions are represented as M and A(M&A). Mergers and acquisitions are complex business transactions between two or more entities. Many companies throughout the world utilize M & A services with the help of consultants and investment banks. Mergers and acquisition services are broad and complex as it requires experience and expertise when it comes to advising. M & A involves agreements and transactions between two parties. Thus it is advisable to have a consultant with knowledge and experience before proceeding with merger and acquisition decisions.

Let us take a glance at what are the advantages of considering Mergers and Acquisitions.

In countries where mergers and acquisitions are accomplished, tax benefits are offered for smooth running of business. When a company merges into other company, it creates new and better capital and avails tax benefits. India is one of the few countries which offers discounted tax rates to the company that wishes to set up business in India.

If you are a businessman who wants to invest in the Indian market and is struggling to carry out a business plan, then you need not worry as there are enough opportunities available in India. Mergers and Acquisitions is such an option as it will save time and effort of a person and will give a boost to your business. By altering the structure of a business and with certain documentation, a business can revive itself and increase its value in the market.

India is a highly populated country. But the amount of job opportunities are much less in respect to the population. So formation of new business ventures will provide more employment opportunities. With Mergers and Acquisitions, the company retains their current employees and fulfill the legal formalities.

Under the mergers and acquisition process, there are tons of opportunities for new goods, services, and products that can enhance growth and expansion of business. For better valuation of a company, it is advisable to go through mergers and acquisition. A newly formed company will gain more experience and will have access to a larger market share with proper guidance.

India being a big country not only in terms of area but population as well, hosts opportunities for businessmen to start up their ventures easily and effectively. The cost of incorporation and other costs are also lower as compared to other countries. Any company wanting to set up in Indian market has access to large market share as the population is vast. A company can invest in an Indian company to have access to cheap and skilled labour and a better taxation policy to increase the efficiency and growth potential of the business.

Mergers and acquisition process offers greater financial stability as the employees and resources are already present in the company. With M & A, only the structure needs to be modified. M & A boosts financial strength with the modified structure of the company that can influence consumers effectively.

Types of Mergers and Acquisitions

The following are some common transactions that fall under the M&A.

Consolidation creates a new company by combining core businesses by giving up the old corporate structures. Shareholders of both companies must approve the consolidation, and upon approval, receive common equity shares in the new firm. For example, in 1998, Citicorp and Travelers Insurance Group made a consolidation, which resulted in Citigroup.

In a tender offer, one company offers to purchase the outstanding stock of the other firm at a particular price rather than the market price. The acquiring company communicates the offer directly to the other company's shareholders, bypassing the management and board of directors. For instance, in 2008, Johnson & Johnson made a tender offer to acquire Omrix Biopharmaceuticals for $438 million.

In an acquisition of assets, one company directly acquires the assets of another company. The company whose assets are being acquired should obtain approval from its shareholders. The purchase of assets is common during bankruptcy proceedings, wherein other companies bid for various assets of the bankrupt company, which is liquidated upon the final transfer of assets to the acquiring firms.

In a management acquisition, also known as a management-led buyout (MBO), a company's executives purchase a controlling share in another company, owning it privately. These former executives often partner with a former corporate officers in an effort to help fund a transaction. Management acquisitions are typically financed disproportionately with debt, and the majority of shareholders must approve it. For example, in 2013, Dell Corporation announced that it was acquired by its founder, Michael Dell.

How Mergers Are Structured

Mergers can be structured in a number of ways, based on the relationship between the two companies involved in the deal:

Horizontal merger: Two companies that are in direct competition and share the same product categories and markets.

Congeneric mergers: Two businesses that offers service to the same customer base in different ways, such as a TV manufacturer and a cable company.

Conglomeration: Two companies that have no common business lines.

FAQ on Mergers and Acquisitions

Why do companies consider mergers and acquisitions services?

Companies consider Mergers and Acquisition services as they have to improve their strategies, grow, and develop their products. By combining into a merger or acquisition, the chances of survival, growth and success of a company generally increases.

Do directors have a significant role to play in a typical merger and acquisition process?

Company Directors are important as they take part in the decision making. All the deals which the company enters into have to be decided and initiated by the directors. Directors also play an important role in disclosing any form of interest in a transaction.

What are the most important steps in a Merger and Acquisition Transaction?

The most important step in is the due diligence process. It involves a complex understanding of the transactions, debt, liabilities, legal and financial aspects before merging with a company or acquiring a company.