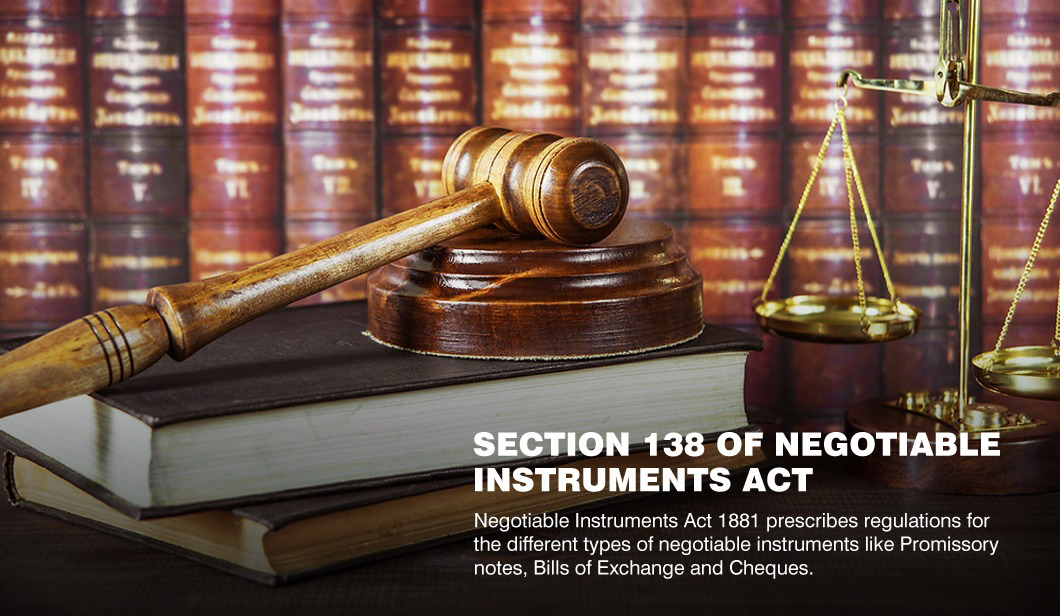 Section 138 of the act lays down the penalty for dishonoring of cheques. Section 138 was introduced as a criminal offence in 1989, taken as a measure of amendment to the Negotiable Instruments Act, 1881. The main objective of introduction of this section was to encourage the use of cheques and to increase the credibility of transactions through cheques by treating dishonoring of the cheques as an offence. Section 138 provides that when the cheque is dishonored for insufficiency of funds or for any of the prescribed reasons, the one who is at default can be punished with imprisonment for a term which may extend to two years, or with fine which may extend to twice the amount of the cheque, or both. This is also a non-cognizable offence.

"Dishonour of cheque for insufficiency, etc., of funds in the account.—Where any cheque drawn by a person on an account maintained by him with a banker for payment of any amount of money to another person from out of that account for the discharge, in whole or in part, of any debt or other liability, is returned by the bank unpaid, either because of the amount of money standing to the credit of that account is insufficient to honour the cheque or that it exceeds the amount arranged to be paid from that account by an agreement made with that bank, such person shall be deemed to have committed an offence and shall, without prejudice to any other provision of this Act, be punished with imprisonment for

[a term which may be extended to two years’], or with fine which may extend to twice the amount of the cheque, or with both:

Provided that nothing contained in this section shall apply unless—

the cheque has been presented to the bank within a period of six months from the date on which it is drawn or within the period of its validity, whichever is earlier;

the payee or the holder in due course of the cheque, as the case may be, makes a demand for the payment of the said amount of money by giving a notice; in writing, to the drawer of the cheque,

Thus from the above section it can be understood that dishonoring of cheques due to insufficient funds in the account or any other reason is a punishable offence.

How to inform the Debtor about return of Cheque? Sending Notice to the Defaulter to pay amount of cheque within 15 days of receipt of the notice.

It would be better to send the notice through a lawyer.

How to file Criminal Complaint under section 138 of Negotiable Instruments Act, 1881 against return of Cheque?

If the drawee sends legal notice for payment of cheque amount against returned cheque, and the drawer does not pay the amount of cheque within 15 days of receipt of the notice, the drawee can file a criminal complaint under section 138 of Negotiable Instruments Act, 1881 within next one month in the court.

What are the Documents required for filing Complaint under section 138 of Negotiable Instruments Act 1881?

The following documents are necessary to file Complaint under section 138 of Negotiable Instruments Act.