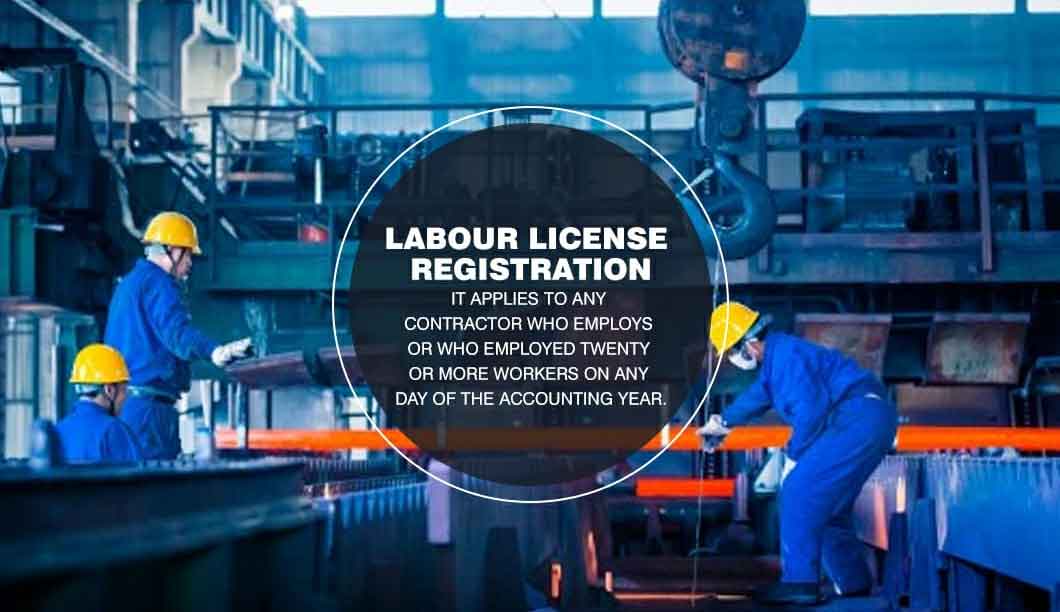 Contract labour refers to an employed person, hired to work in a company through a contractor for a specific work and for a specific period. The contract labours are not recruited directly by the companies but are recruited on the basis of third-party contracts, and they do not have a particular payroll. Companies hire contractors who recruit these labours for different jobs. To prevent the ill-treatment of workers in any establishment and to ensure a healthier working environment for the workers, the contract labour regulation and abolition act were introduced in 1970. This act, apart from regulating the welfare, health, payment of the contract labour, also has detailed provisions for the registration of the companies and grants of the license to the contractors. Labour Licence registration is granted to any establishment or any contractor in which twenty or more persons are employed on any day of the accounting year as contract labour.

Applicability of the Act

The Contract Labour (Regulation and Abolition) Act applies to the following establishments:

Who is a Contractor?

As per Section 2 (1) (c) of the Act, a contractor refers to any person who supplies contract labour for any work of an establishment and includes a sub-contractor. A contractor undertakes the responsibility to produce a given outcome for the establishment, other than the supply of goods or services to such establishment.

Every establishment which proposes to employ contract labours for its work is required to obtain a certificate of registration from the respective Government.

The labour license registration process is explained as follows:

Every certificate of registration will display the following;

The following documents are to be produced by the contractor for registration:

In case an establishment or a company required to be registered under Section 7, has not been recorded within the time specified for the purpose under that section, then the penalty will be given as per section 36.

Every contractor who has employed twenty or more workers on any day of the month has to obtain a license for engaging contract labour working for any establishment.

The authorized licensing officer will issue the license as per the provisions under section12.

Procedure for Grant of License

License is granted following the under mentioned process:

Procedure for renewal of the license is mentioned below:

What is the purpose of labour license?

Every contractor who has recruited twenty or more workers on any day of the financial year has to obtain a license for engaging contract labour working for any establishment. The authorised licensing officer issues the license as per the provisions under Section 12.

What is the minimum no of workmen for whom labour license is required to be obtained?

It is applicable to every company i.e., the Principal Employer, in which 20 or more workmen are employed or were employed on any day of the preceding 12 months as contract labour.

Why Labour Licence is required?

Any contractor engaging 20 or more contract workers is obliged to get license. The object of the Act is to regulate the employment of contract labour in certain establishments and provide for its abolition in certain circumstances and for related matters.

What is the meaning of contract Labour?

A contract labour is the one whose freedom is restricted by the terms of a contractual relation and by laws that make such arrangements permissible and enforceable.

Who is a principal employer under Contract Labour act?

A "principal employer" as defined under the Act refers to any person responsible for the management and control of the establishment. For example, in a factory, the principal employer would be the owner or occupier of the factory or a manager under the Factories Act, 1948.